The center of the world for several centuries.

The center of the world for several centuries.

Galata Tower area is north of the Attaturk bridge.

Just north-east of there, along the Istiklal, is Beyoğlu. I'd recommend staying here, as it is easy to get around the city, and there is a lot of places to eat, drink, and public transportation. We stayed at this Airbnb. I'd ask the host if he has anything for your size. We stayed on the top floor, after talking to the host.

The Istiklal is a pedestrian road that winds through the area. There's a tram that you could take if you wanted, but we never did. Lots of restaurants, shopping, and people out at night. Also some bars off the side as well. At the North-East end of the Istiklal is Taksim square, which was the site of the big protests over the last couple of years.

The areas along the Bosphorus are pretty swanky.

The Golden Horn is the area where all the old old stuff is. Definitely spend some time just walking around here.

You need a visa. It was $20 USD on arrival in 2013, but I guess they are transitioning to an e-visa, gotten prior to arrival.

Turkish Lyra is the type of currency. I'll use TL.

Mosques are closed during the prayer times (which are several times a day) and Dolmabahce is closed a couple days a week. So check hours and might need to plan days accordingly, as the days closed might be different than the ones I quoted.

The public transit is actually really good. Look to get a transit card and take the trains most places. Especially between the areas between the Golden Horn up along the Bosphorus (towards Ortaköy and Dolmabahce). You may be surprised to find your go-to Google Maps has poor coverage of public transit routes throughout the city, so instead use Trafi which proves to be an excellent substitute for navigating the transit system.

The roads are small, and there is generally lots of traffic, so taking a cab probably is to be done sparingly.

There is a train to and from the airport. We were staying in Beyoğlu, and it took about an hour by train to get to the airport from there. When we arrived in Istanbul, our Airbnb host arranged a cab from the airport. It was 15 euros per person, which was worth it to take us directly to the place we needed to go.

Get some Raki a strong liquor made from anise seeds. I had it mixed with chilled water, which gives it a milky white color. I really like it, but I also like anise / black licorice.

Turkish Ice Cream. I saw and ate ice cream all over the place. Tried some outside the spice market, and along the Istiklal.

Turkish Tea. Tea (spelled çay, but pronounced chai), is really good. Everywhere will give you tea. It is 1 TL and comes with a big sugar cube. The sugar is optional. You'll see guys carrying around tea in the markets which they take to the vendors. Or, you can get Turkish coffee at some places.

Pistachios. Turkish Pistachios are the best, if you know your pistachios. I'll be your best friend if you bring some back for me. You can get them at the spice market. I paid 28 TL for 1 kilogram. Might be able to get a better deal?

Street kebabs. So good. Donor means the meat on the spindle. Look for Donor kebabs for around 6-8 TL

Börek, which are cheese stuffed pastries. So good.

The hip part of Istanbul

The old part of Istanbul 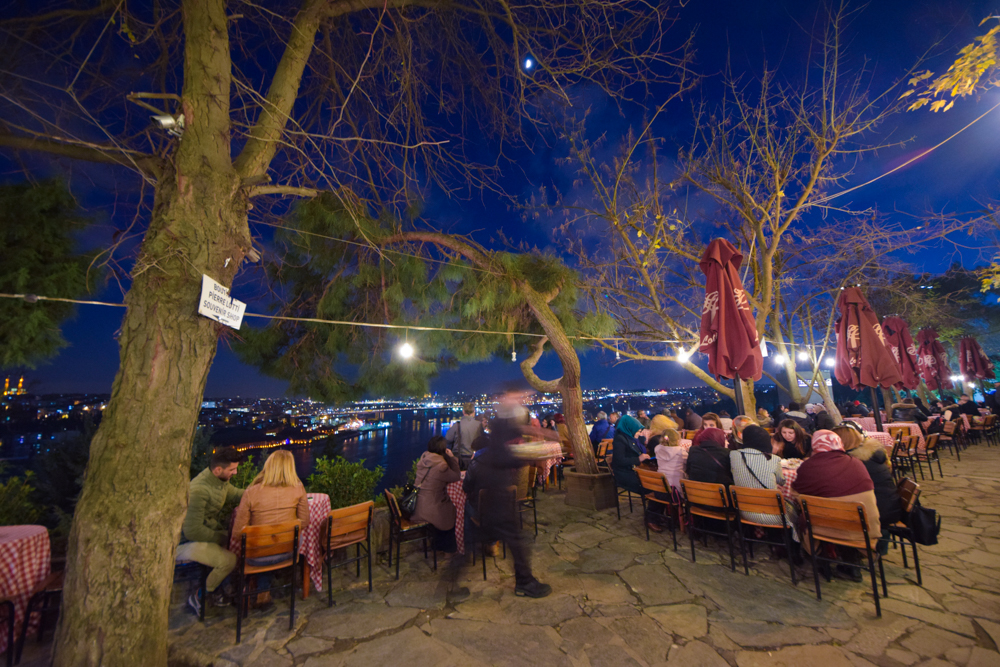 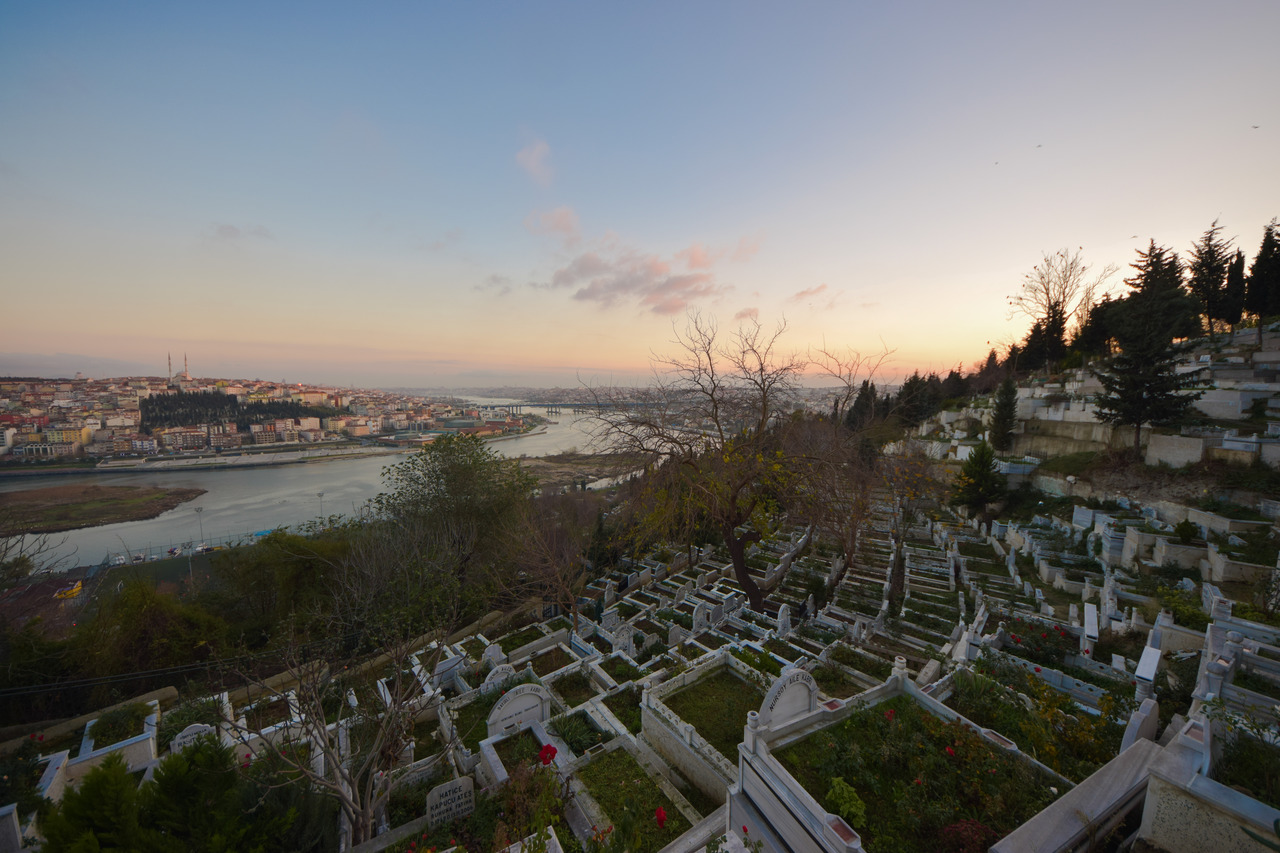 Nestled a little outside of the city core, Pierre Loti hill offers an incredible opportunity to take in the Golden Horn - Istanbul's major urban waterway - and the rolling cityscapes of Beyoğlu and Fatih with locals and tourists alike.

A number of buses will get you to the base of the hill from the east of Fatih (think Spice Market), at which point you have the option of taking a cable car to the top, or taking the medium length walk (< 1.5 mile) along the stone path through the hillside cemetery that adorns the southern slope of the peak.

The cemetery walk is anything but downcast, and provides a uniquely tranquil way to meander to the summit and earn your reasonably priced tea (all things considered - ₺3) as you take in an Istanbul sunset. As evening falls more visitors will spill into the outdoor seating area, but turnover is frequent and a prime hill-side table shouldn't be a long wait (<15 minutes). 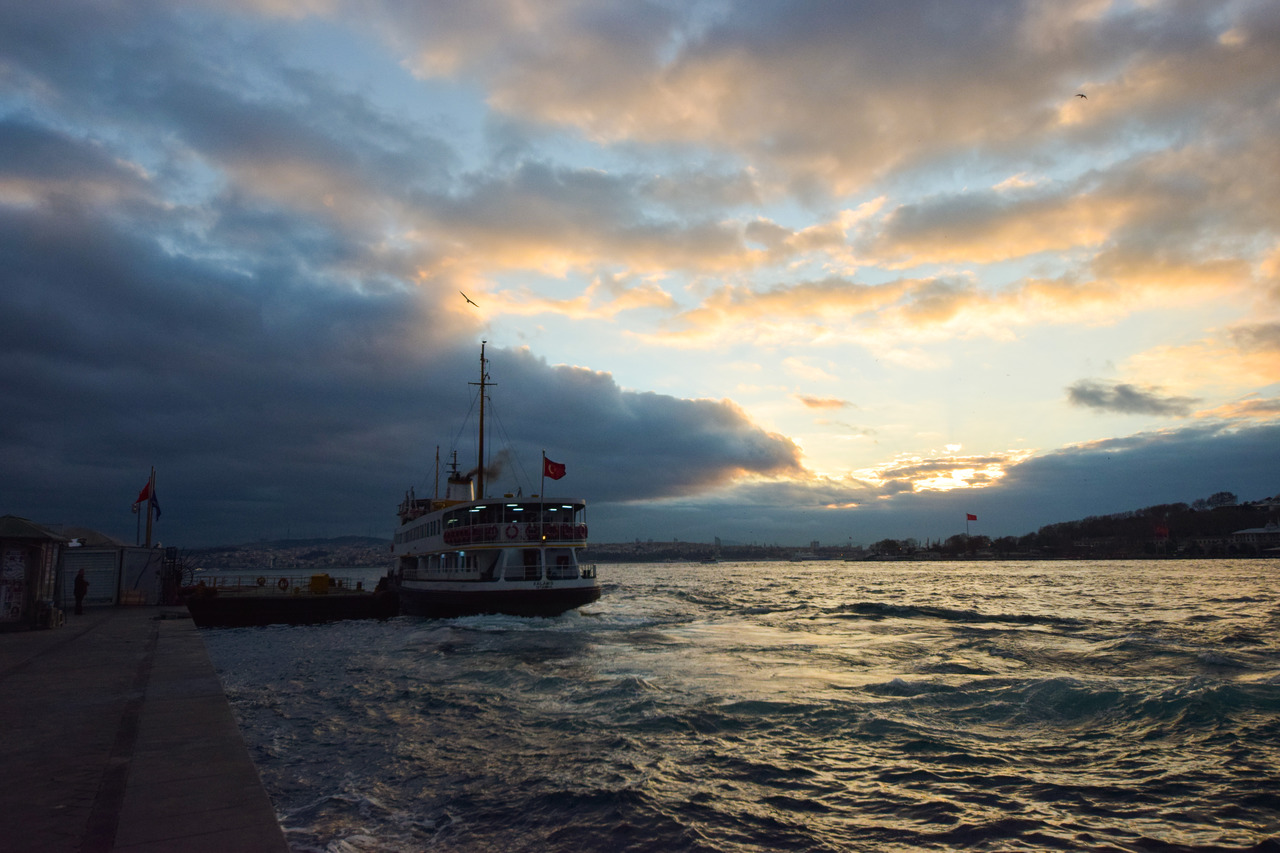 I'd recommend taking a boat cruise one day for sure. We just walked to the south side of the Galata Bridge, and chatted up a boat guy there. Paid 15 TL for ~2 hours, but might have been cheaper since we were a group. Take a jacket and sit up top. This might be good to do on the first day, so that you get a layout of where things are along the Bosphorus. Then, when you get back, wander to the Spice Market.

This was pretty swanky. I'd recommend. The spot on the Bosphorus and all the rooms were sweet. Our tickets were 40 TL. There are tours, and entrance times. I wrote down: "Thought the line would be really long, but was quite short. Got there at 11:40 am, and the English tour was at noon". I remember the tour being worth it, and less than an hour long. Then we did a tour of the Harem there, which was 10 minutes after the other tour ended. That was less than an hour long too.

Dolmabahce is closed Monday and Thursdays.

I didn't make it here as it was covered for renovations. It is supposed to be really cool. You can probably see it from the Bosphorus cruise. Otherwise, go here after Dolmabahce.

There is a city in Turkey known for Whirling Dervishes, and there are shows in Istanbul. I didn't go to one, as Dean had been to one on his last trip, but this could be a fun activity.